What to Pack for a Trip to New York

With more than eight million people, New York is the most densely populated major city in the USA. New York has been described as the cultural, financial, and media capital of the world.  The ‘City that Never Sleeps’ has a 24-hour buzz. Attractions including the Empire State building, statue of Liberty, and Times Square are visited by millions every year. New York is also home to the headquarters of the United Nations, with world-class museums, art galleries and sports.

This guide covers your packing essentials for a trip to New York. It can get cold in the winter, and hot at the height of summer. All year round you’ll need essentials like comfy shoes, somewhere secure to keep your money and a pocket guide to all those attractions.

Packing for the Major Attractions in New York City

Central Park is located between the Upper West and Upper East sides of Manhattan. The Park has been the location for an incredible number of movies. It is said that up to ten film shoots take place in the park every day (little wonder why so many find it familiar upon visiting for the first time). The park covers 843 acres. It is estimated that 42 million visitors head to Central Park on an annual basis.

This iconic landmark was built in 1931 and is located in midtown Manhattan. The building stands a total of 1,454 feet high and was the world’s tallest building until 1970. The building has an Art Deco look and tourists can visit the observation decks on the 86th and 102nd floors. In 1933, the structure played a major role in the movie ‘King Kong’, helping make it a cultural icon.

The Statue of Liberty was a gift from the people of France which was given to New York in October 1886. The statue features Libertas (the Roman goddess of Liberty) who holds a torch aloft in her right hand and holds the US Declaration of Independence in her left. The monument is located on Ellis Island, and you can visit the statue by boarding a ferry. 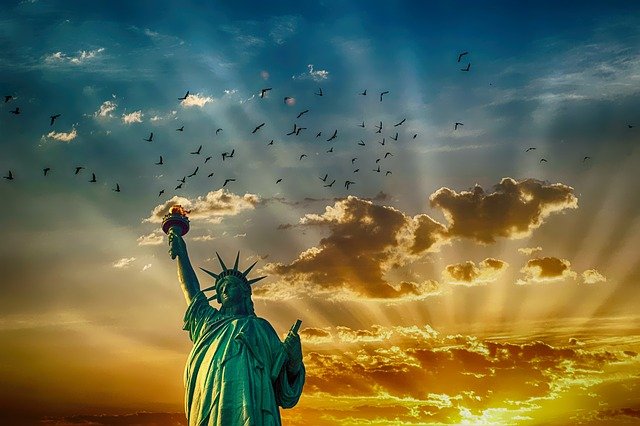 Times Square is located at the intersection of Broadway and Seventh Avenue, stretching from West 42nd to West 47th. The location is known for its brightly lit billboards and is considered to be one of the busiest places on the planet, drawing more than 50 million visitors annually. One nickname awarded to Times Square is ‘The Center of the Universe’.

What to Pack for a Trip to New York?

Here is a handy list of all those essentials you will need in your suitcase or hand luggage as you embark on a trip to the Big Apple:

One of the things you’ll certainly be doing in New York City is a lot of walking. Whether heading to Central Park, walking around the shops, or heading to the five boroughs, your legs will certainly be getting a lot of use. Pack a pair of trainers or soft shoes to ensure your feet are well looked after. If you buy shoes on your trip, it might be an idea to save them till you get home.

New York City is such a large place, that a travel guide is a must. One simple purchase will guide you the best way to get around the city and enable you to make plans on each day of your stay. A good travel guide will also uncover some hidden gems in the city that you might not know about otherwise.

It can be an idea to arm yourself with layered clothing when taking a visit to New York. The different weathers in the city can be extreme, especially in the spring and the fall, where a day can range from severe heat, to extremely cold or wet. Therefore, a lightweight raincoat can be very handy. When making a trip over the winter, it’s safe to say you need to wrap up warm.

With all that walking around the city, it can be an idea to bring a water bottle with you. Fill it up before you go out for the day, and you won’t be stopping to purchase water. It’s just as handy if you want to take a run around Central Park or any other of the parks in the city.

New York is certainly a place where you’ll want to take lots of pictures and make many social media posts. With a portable charger, you’ll have no worries about your phone battery dying and not being able to capture those all-important moments.

A bum bag, or as they would call it in New York, a fanny pack, can be a useful addition for your trip. You’ll not want to be lugging a huge bag around the city, so a bum bag is the perfect solution to keep your essentials in. Even better, a money belt or pouch to keep those dollars and cards safe will help you relax and enjoy the attractions without any security worries.

What to Pack for a Trip to Thailand?

What to Pack for a Trip to Norway

What to Pack for a Trip to Niagara Falls

What to Pack for a Trip to Havanna?